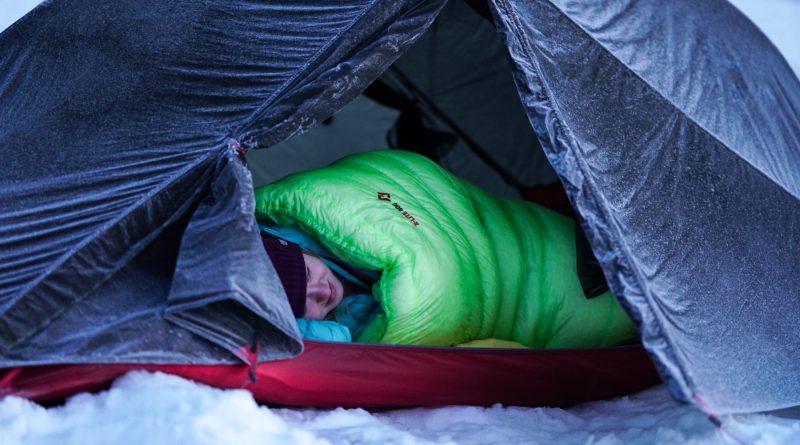 On our last camping spent a couple of half-uncomfortable nights because she has a down jacket for -15 ° comfort limit and how it was not so cold, she had to sleep with the bag open, but then there she was cold… short story, I didn’t have the right sleeping bag for that outing.

In my experience there are three things that are essential for trekking or mountaineering and where you should not make mistakes is in the choice if you want to have fun and not have problems in an outing. These are: Shoes, Backpack and Sleeping Bag.

In this column I want to talk a little more about sleeping bags, to try to help you choose the right bag for each activity.

To know well which sleeping bag we should buy, it is necessary to first know how they work. The first thing to understand is that the sleeping bag does not generate heat to warm the body, the job of a sleeping bag is to retain and prevent the heat that emanates from the body from being lost so as not to get cold.

Sleeping bag season is one of the most vital factors when you’re considering best value sleeping bag. We have dilated the different aspects below so you can choose for yourself what is best for you. However, we have also mentioned our picks as well.

What makes the bags so warm?

When we say that a sleeping bag has thermal capacity, we are really referring to its ability to retain heat and prevent cold air from entering.

What sleeping bags do is create, through the padding they have, an insulating air barrier that protects from the cold outside and retains the hot air inside. This barrier is nothing more than a space where hot air is trapped between the inside and outside of the bag. This is known as LOFT and depending on the filling this loft will be larger or smaller.

What this loft does is that the heat that emanates from our body is trapped in the spaces between the fibers or feathers. Remember that we have a body temperature of 37 ° C and that if we trap and reuse the heat that we emanate, the air around us will have a similar temperature. That is why the more loft a bag has, the more heat will be trapped in the middle and the less heat loss we will have.

So the most important thing in a sleeping bag is the type of padding it has. There are two types of filling, synthetic fibers or natural feathers (down).

The generic term for duck or goose down filling is “feather,” but most sleeping bags use a ratio of 90% down to 10% feather.

In a stuffed bag of goose or duck feathers, the quality of this down is what will make the difference. Goose down is the one chosen for the highest quality bags because its capacity to occupy a large space with minimal weight is enormous. The down is taken from the chest area of ​​the birds.

Unlike a feather, which is a stem with hairs, the goose down (or Cluster) is a kind of asterisk, like a point with many hairs around it, which when several are joined, generate a large intermediate space where the hot.

The ability of a down to take up more space is known as Power Fill , or CUIN (amount of down it takes to fill one cubic inch). The higher the Power Fill value , the greater the ability of the down to expand, therefore a bag filled with that down will need less filling to achieve a higher loft.

Something that is important to mention is that nowadays the most recognized manufacturers of bags are very concerned about the treatment given to birds where they get their feathers, be they geese or ducks. Brands such as Rab, Mountain Equipment or Robens are subscribed to programs such as Down Codex, and use feathers only from birds raised under benevolent conditions and that are for the food industry, that is, there is no suffering on the part of birds as in Chinese manufacturers. of low quality and price that pluck the feathers from live animals to make the most of them, regardless of the suffering of the birds.

In synthetic fibers, the same happens as with feathers or down, in the sense that there is filling of better quality than another and that makes one bag weigh more or less than another. Also, the greater the amount of padding, the more loft the bag will have and the better the temperature performance it will have. But the bag is going to weigh more.

In the late 20th century, manufacturers of synthetic sleeping bags used Quallofill or Hollofill as the most common filler. These fillings were characterized by being of continuous filaments which made them very compact and made it necessary to have several layers to achieve the desired insulating effect, which implied that the bags were bulky, not very compactable and heavy.

Over time the industry has perfected synthetic fillers to look the closest thing to the pen. One of the brands that has achieved the most in this direction is the well-known Primaloft, which has managed to emulate the capacity of the feather quite well by developing synthetic fibers with short and discontinuous filaments, which once inside the bag expand in all directions generating a very nice loft. This type of synthetic padding is much more packable and lighter, which makes it very attractive to brands today.

Currently, better synthetic products are being developed such as 3M Thermoball , or 3M Cirrus , which are small balls of synthetic fibers that create a cloud effect inside the sleeping bag (or garment, such as the RAB Nebula) and it is very much like the pen. Nowadays most of the brands have their own synthetic filling since with that they manage to have the best price / quality ratio.

In any case, there is still no synthetic fiber that achieves the combination of lightness, expandability and durability of the natural feather.

Just as slopes are my natural enemy, humidity is the main enemy of sleeping bags, in the sense that the filling tends to absorb this humidity and its insulating capacity is gradually diminishing.

In the case of the feather, this can sometimes be dramatic as the feathers when wet lose the ability to expand and stick together leaving only small balls of feather in each baffle (tubular section where the padding goes). that makes the bag go from a loft of 20 cm to one of less than 1 cm, where only the thin fabrics protect us from the cold outside.

On the other hand, the synthetic filling absorbs very little water, which means that despite being wet it continues to give a lot of loft and therefore maintains the insulation capacity in a high percentage.

Fortunately today the leading manufacturers of down or goose down filled sleeping bags use feather treated with impregnators such as Nikwax , which makes the feathers hydrophobic and water repellent. This prevents the pen from getting completely wet, which in humid conditions can keep your Loft to a large extent.

Of course, it should be noted that despite the hydrophobic treatment, in environments with too much humidity (such as Patagonia) the feather can collapse and a synthetic filling bag is still better.

Sleeping bags have a temperature range that varies depending on the manufacturer, as the combination of construction, materials and design are unique to each brand.

In Europe, as they saw that each brand could say that their sleeping bag was for lower temperatures than another without anyone being able to control the effectiveness of this, they decided to create a standard, EN 13537 that sets a standard when measuring in certified laboratories and with the same tests the different sleeping bags of each brand. With this, the temperature range of a sleeping bag is known effectively and safely.

This standard is not mandatory, so brands that adhere to it will have more credibility than those that do not. Today practically no quality mark is outside the EN 13537 standard.

To test a sleeping bag, one starts by putting a special mannequin inside the sleeping bag that has sensors in different parts and that is “dressed” with a thin first layer. This bag is placed on an insulating mat and the manikin is then heated to body temperature and the desired external temperature conditions are simulated. After several hours, the data and sensors are analyzed and it is possible to know very precisely the four different temperature ranges that this test measures.

It is important to understand that this rule is a simulation and that in real life it generally feels colder than the sleeping bag indicates. In other words, if you go with a -9 ° comfort limit jacket and sleep with 9 ° below zero, it is very likely that you will be cold with just a first layer.

The great advantage that the bags are regulated in their temperature is that once this factor is eliminated, the bag can be chosen according to the other characteristics. That is, if I have four bags that have the same temperature range, I can see which one weighs less, which one compacts the most, or which one has the best weight, compaction and price ratio and thus make a smarter purchase.

Construction of a sleeping bag

Shape of a sleeping bag

The shape of the sleeping bag will determine the use to which it will be put.

For warm nights of camping in summer or sleeping in the house of the grandparents during the holidays, a rectangular bag will be more comfortable, since it will allow you to sleep in a more similar way to being in a bed. They have the disadvantage that it cannot be closed at the top because it does not have a hood.

For any other outing where it may be a little colder, either from a campsite to the high mountains, the bag must be of the Mummy type (in the shape of a sarcophagus), that is, it will have the shape of the body and it will have a hood that covers the head, to have greater insulating power.

Characteristics of a sleeping bag

Sleeping bags have some characteristics that make them ideal for withstanding low temperatures.

Among these can be found:

Types of construction of a sleeping bag

Sleeping bags are going to have various ways of being constructed. One of the factors that affect the type of construction is the filling, which can be bird down (Goose or Duck) or synthetic fibers.

In general, the higher the temperature that the sleeping bag will withstand, the simpler its construction will be.

All sleeping bags are built with baffles, which are the divisions that the bags have and is where the filling goes. It is manufactured with baffles to keep the filling evenly distributed and that it does not bunch up leaving segments without filling, which would render the sleeping bag useless.

5 Mistakes to Avoid in a Car Accident Claim