“Wrong Side Of A Working Man,” is a ground-breaking modern-day adult illustrated fantasy novel set in the contemporary world in which Alex Cides wakes to find his wife has disappeared, his daughters fear him, and a mysterious curse has thrown him out of balance with the universe. Set in the underbelly of Los Angeles, Alex discovers that ten challenging tasks stand between him and a new start, or total destruction.

This modern-day mythic tale was written by author, filmmaker, and artist, Justin DiPego. DiPego is the founder of DiPego Now Entertainment and currently lives in Santa Monica, California.

Could you please tell us a little bit about yourself? Has writing always been a dream of yours?

I am the son of two writers and my brother is a writer too, so I grew up in a house that valued and practiced storytelling every day. With that in my DNA, I see writing as a job, but not a desk job. Stories must be sought out by experience and therefore almost everything is writing. That means whether I was installing skylights in my years in the building trades, or training horses during my years as a wrangler and ranch hand, I have always been gathering stories.

In your opinion, at what point do you think someone should call themselves a writer?

That’s a good question and a hard one. We all have cameras on our phones, but we are not all photographers. To extend the photography metaphor, I think you are a writer if you view the world through the lens of your writing and, on top of that, you are dedicated to actually doing the work. That doesn’t mean it has to be your full-time job, but that you prioritize putting pen to paper, or sitting at your keyboard, even if it’s for only an hour a week.

How would you describe, “Wrong Side Of A Workingman”?

Wrong Side of a Workingman is a modern urban fantasy adventure across the streets of LA. Alex is a grown-up LA punk rocker with a good life, a good marriage, who wants to do good in the world, but he loses it all when he’s hit by a mysterious curse. He has no control over his life and needs to regain it and lift the curse by discovering his place in the world.

Alex’s adventure takes you into corners of the city you may not be aware of. It also explores issues of our interconnectedness, of toxic vs. positive masculinity, and our place in the universe, all through the vessel of the main character.

It starts out very much grounded in the real world and as the story progresses, it becomes more fantastical and more mythological. He discovers there’s this sort of magical world or realm that exists right under this reality that we live in.

What part of the book did you have the hardest time writing?

Finding balance between exposition and mystery is always a challenge. I want you to understand my worldbuilding, but I also don’t want to spell it out for you. My narrative voice is of a storyteller, rather than a reporter because I want you to find an active role in the unfolding of the tale.

How long from start to finish did it take to write?

I wrote the first version of this maybe fifteen years ago, but then it sat on the corner of my desk for a decade while I worked on other things. I picked it up again in earnest when the Covid lockdowns started in 2020, so it’s a little hard to say how much time I actually spent clocked in on this. Leading up to publication I was working on it full time for several months.

How does the book’s setting in and around Los Angeles affect the story?

Los Angeles is a vast and diverse city with a deep history. I wanted to capture that and deliver it to readers who don’t live here, to show sides of the city they probably never heard of. And I want fellow Angelinos to recognize our city reflected back at them. LA is more than just the setting of the story, it is a multifaceted character, holding secrets and mystery and magic our hero has to navigate in order to survive his ordeal and hopefully lift his curse.

Can you talk a little bit about the mythology in the book? Did you have to do any research?

I wanted to find a way to visit those facets of the city, without simply writing a memoire of my time in the trades, going from home to home and business to business across the Southland. So, I hit on the mythic structure of the twelve labors of Hercules. Our hero must travel across the city performing fantastic tasks in a multitude of locations.

I’m half Greek, and I grew up on the myths as if they were family stories. My research into Greek myth was largely as a reminder, but I didn’t want to restrict myself to a single point of view. I did a lot of reading on Afro-Caribbean and Mexican mythos and spiritualism, as well as Native American, Mesopotamian, Chinese and other cultures, especially seeking out their commonalities.

Tell us about the central character in the book, what drives him?

Alex, our main character, is a grown-up LA punk rocker. He’s a loving husband and father, comfortable in himself and who he is. And all of that gets exploded by his curse. There’s a throughline of music through the story and one thing about the LA punk scene that’s important going back to its inception, is it’s very inclusive. It is very anti-homophonic, anti-racist, etc. and that’s an important part of Alex’s ethos. He grew up with that and now that he has this curse on him, he develops this chronic pain and flights of temper and anger, which all fly in the face of his own personal character. He’s no longer the man that he used to be, and he has to reacquire his positive masculinity as opposed to toxic masculinity. He’s a physically capable, big, tattooed guy, who may be scary if you didn’t know him. But he’s actually a sweet, gentle, loving father and husband and when this curse comes on him, he loses all of that.

In what way do you hope this book is perceived by readers?

First and foremost, I want you to find an entertaining, compelling adventure that sweeps you along in the current. I have messages to deliver, but I didn’t want to write a treatise or an essay on diversity or positive masculinity, those themes lie under the surface, allowing you do dive down into them as the story races above – just like in the best myths. 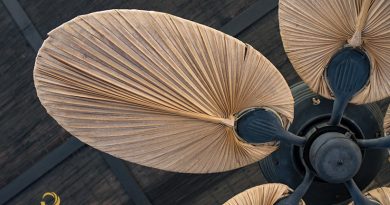 How Can You Buy the Best Ceiling Fan in India?

How You Save Money When Laying Down Timber Flooring?