Words are one of the most powerful tools in the world. These work as effective shields and can function as strong weapons when needed. The right usage of words can initiate revolutions and pave the way for change. The role a writer plays in society stretches further than providing simple entertainment, and it goes way beyond the symbiotic relationship between a writer and a reader. Writers are storytellers who can use the power of words to change mindsets, sow the seeds of change, and bring a revolution in a society. Writers can force others to face the truth; they can open the minds of people and instill a sense of empathy in them. The stories and literary pieces, both fiction and non-fiction writers create offer the world archetypal role models, and most importantly, they give the world hope.

Novels like “The Jungle,” by Upton Sinclair, “Things Fall Apart,” by Chinua Achebe, “The Grapes of Wrath,” by John Steinbeck, “To Kill a Mocking Bird,” by Harper Lee, “Beloved,” by Toni Morrison, and many others have contributed to changing the way world functions. These novels and novelists have served as torch-bearers for the world. Many others are making their way to the top by creating meaningful pieces in the literary world. A true marker of this example is Fazle Chowdhury, the Bengali-American novelist who is contributing to both fiction and non-fiction literary world. A management consultant and a contributing writer at several notable platforms who excels in the art of tying words together into meaningful pieces that change mindsets and force people to think in a different direction.

A Novelist Who is Contributing to the Shift of Mindsets

Fazle Chowdhury had a chance to travel and discover the hidden gems around the world that gifted him the skills to step into the world of writing. His father, Rahman Chowdhury, was an economist who worked for the United Nations agency World Food Program (WFP), and his mother, Mumtaz, was a trained sociologist. Due to his father’s profession, Fazle traveled to and stayed in different parts of the world. Some of the places that he spent his childhood in included Cambodia, England, Sri Lanka, Nepal, Singapore, Italy, India, and Pakistan. The young Fazle went to a boarding school, Kodaikanal International School, in Tamil Nadu, India.

He graduated with an MSc. in Organization Management in 2010 from Northeastern University in Boston, Massachusetts. Going on to Harvard’s Kennedy School of Education in 2015 for a program in stewardship in Non-profit Management.

He stepped into the world of writing after more than ten years of management consulting with his first book, “Promises of Betrayals: The history that shaped the Iranian Shia clerics.” It was published on November 26, 2018, and it instilled a hype among the readers. In just a few weeks of the book’s release, it was being referred to as the “best book written on Iran.” Fazle has traced the entire history of Iran with beauty and grace. He talks about the role of Shia theocracy in the country. His volume serves as an invaluable tool for understanding context to Iran’s present, including its government enjoying an overwhelmingly positive response as he steered clear of common clichés and missteps that plague the discussion revolving around Iran. The book won the December 2018 Literary Titan Award.

The IndependentBookReview.com stated, “Promises of Betrayals is an intensive, well-written history of the Islamic leadership in Iran, aimed to educate Americans on why they should improve their understanding of the Middle East… This could prove to be a truly worthwhile read for those with prior knowledge of Iranian culture as well as for those dedicated to improving America’s foreign policies.” SelfPublishingReview.com also appreciated Fazle’s attempt to change the mindsets of people about Iran and its history. It stated, “Chowdhury offers an in-depth analysis of the complex Iranian situation, with historical and newsworthy facts that anyone interested in the fate of the region would do well to study… Given some of the bellicose rhetoric about the region, this book is exceptionally well-timed, offering a measured look at the country that acknowledges deep-rooted problems, but also the historical reasons for Iran’s current situation.”

In 2019, Fazle Chowdhury launched another book on Iran, “Revived Failure: Iran’s reality after the American withdrawal from the nuclear deal,” discussing the Joint Comprehensive Plan of Action (JCPOA) between Iran and the United States.  In 2020, he became a reputable novelist with the release of “With Dark Understandings,” a thriller novel depicting a genre emulated by the late Brazilian Author Erico Verissimo’s O Senhor Embaixador. In the past, the change-stirrer novelist has also worked in the United Nations Development Program (UNDP) and International Business Machines (IBM). He is working to change the way people think with his fiction writings and currently serves as a Fellow at the Global Policy Institute in Washington, D.C. 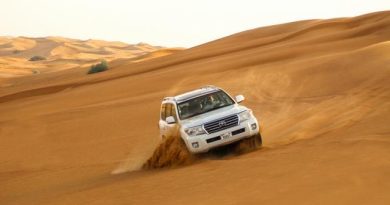 The Best Dubai Desert Safari for an Unforgettable Experience